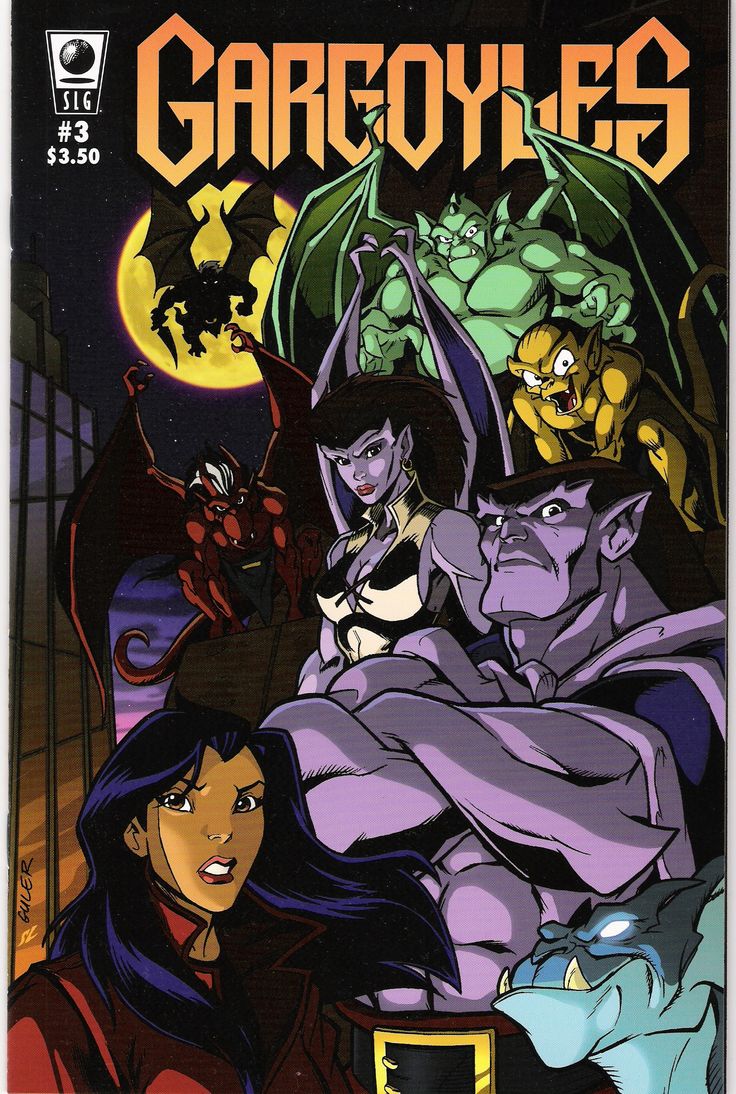 Seeing as most of us have never heard of Gargoyles, it might help to start with a definition.  Gargoyles is an animated urban fantasy series, with some superhero undertones, primarily set in Manhattan.  It originally aired in the mid 90’s and largely took place in the then-present.  Many parts of Manhattan were substantially more dangerous at that time than they are today, and so the series is a bit of a period piece by modern standards.  Fortuitously, however, this works in the show’s favor: the perception of heightened crime is a necessary backdrop for any crime-fighting story to work.  You can’t have Batman without Gotham.

Gargoyles kicks things off with a two hour pilot (without commercials), serialized as five 24 minute episodes: “Awakening,” parts 1-5.  “Awakening” efficiently introduces us to this world and some of its characters.  At the same time, the writing is more conservative than it initially appears, and deliberately refrains from showing us everything.  This leaves the actual story plenty of room to breathe, and also leaves open questions for later episodes to answer.

If you’ve seen other “kids” shows, the plot may feel a bit familiar.  A cop, Elisa Maza (Salli Richardson), befriends a clan of time-displaced gargoyles, led by Goliath (Keith David).  She keeps them secret from the outside world as best she can, while moonlighting as the Agent Scully for our fantasy setting.  But it rapidly becomes apparent that there’s more going on than meets the eye.  The story is very arc-driven, and every action has repercussions.  As things progress, we get to know both our heroes and villains better.  Most of the latter have good (to them) reasons for their acts of villainy, but the former are just as lost as we are, and gradually get their bearings over the course of the series.

Perhaps impressively for a Disney show, on at least one occasion, a villain blatantly murders a few random innocents right in front of us, and visibly enjoys it.  There’s actually quite a lot of killing in this series, but most of it is just barely out of frame or involves people falling from high places, and gore is minimized.

The voice acting is simply brilliant.  Richardson and David have wonderful chemistry.  They also managed to hire at least half the cast of Star Trek: The Next Generation for various roles both major and minor, which injects a welcome sense of familiarity to the show.  You may be surprised to learn that Marina Sirtis is actually capable of emoting.  Mass Effect fans already knew that (and will also recognize David as Captain Anderson), but it’s a bit of a shock for everyone else.  Sadly, they weren’t able to afford Patrick Stewart, but Jonathan Frakes as David Xanatos is the next best thing.  Other highlights include Brent Spiner doing his Lore voice and Tim Curry being Tim Curry.

As mentioned above, the first five episodes collectively constitute the pilot.  The rest of the season (8 additional episodes for a total of 13) undertakes a variety of character building and plot setup tasks, but none of it feels the least bit wasted.  Season two is greatly enriched by this preparatory work, and season one does an excellent job of introducing us to these people and making us care about them.  For a setting with so many moving parts, gradual development is far more reasonable than trying to infodump the entire world onto us at once.

Season two is substantially longer, a full 52 episodes.  This brings the total to 65, Disney’s standard threshold for syndication.  While season one focuses on setting up the world and introducing the main characters, season two is where the show really comes into its own.  The series remains primarily episodic in basic structure, but there are three unrelated “part 3” episodes in season two, as well as a number of long running plots that surface periodically.  It also continues the trend of introducing and explaining new elements of the world, but at a more relaxed pace than season one.  Finally, season two has a significant amount of Shakespeare running through it, with clear references to multiple plays, and at least once a character actually spells it out.  Some of this appears in season one, but as usual it’s laying the foundation for what is to come.

There is an extended arc of season two with heavier exposition and worldbuilding.  While I did find that arc interesting to watch, I felt it a bit tiring after a few episodes.  Not everyone agrees with me on this point; in fact, it’s a rather controversial opinion.

There was, technically, a season three (officially Gargoyles: The Goliath Chronicles or TGC for short), but you won’t see it discussed much in polite company.  Series creator Greg Weisman (mostly) left the production after the first episode.  The effect on the show was swift and negative.  It immediately calcified into a standard Saturday morning cartoon, the ratings fell, and the network promptly canceled it (though it did at least get the dignity of a real season finale).  The episodes which Weisman did not work on are widely regarded as non-canonical, including by Weisman himself.  When he had the opportunity to make a series of comic book sequels with Slave Labor Graphics, he adapted the first episode to the page, and then systematically disregarded everything else that happened in TGC.

The SLG comics were published in two series, Clan Building and Bad Guys.  The former is a direct continuation of the show, while the latter is a spinoff following several ex-villains who had quietly disappeared from the later episodes.  Both targeted a moderately older audience and were more willing to show “real” violence.  There were plans to make more spinoffs, but they never materialized.  Unfortunately, SLG’s license expired and these comics are now out of print.

Greg Weisman regularly answers fan questions at http://s8.org/gargoyles/askgreg/.  He also tweets as @Greg_Weisman, and occasionally answers fan questions there.  The fans have indexed and collated information from both sources (plus the original material) into a wiki at http://gargwiki.net/.  There’s also a Wikia wiki, which is exactly what I’ve come to expect from Wikia: low quality and plastered with advertising, so I won’t dignify it with a link.

5 thoughts on “Gargoyles – A review”