A newcomer to a Catholic prep high school falls in with a trio of outcast teenage girls who practice witchcraft and they all soon conjure up various spells and curses against those who even slightly anger them. 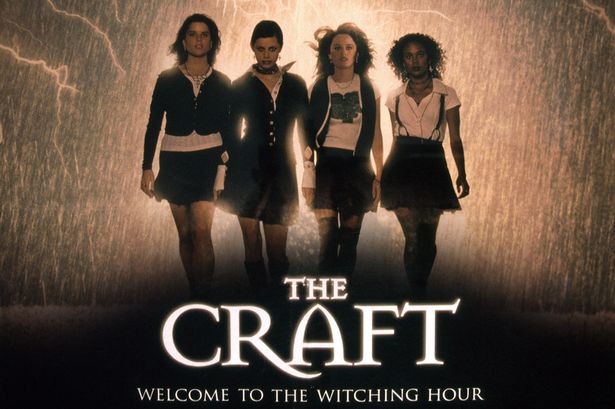 The movie opens with Sarah (Robin Tunney) moving to a new city (LA) and she is immediately enrolled in Catholic Boarding School (CBS), which is never a good thing. Is there a movie anywhere that portrays kids in a Catholic school being well balanced who don’t become criminals? I think not. Three Gothic girls and Skeet Ulrich (the poor man’s Johnny Depp) also attend, along with Breckin Meyer, the kid who always play an idiot. He doesn’t disappoint. Skeet introduces himself to Sarah and says the three Goths are witches. Then they introduce themselves to Sarah. They are Bonnie (Neve Campbell), Rochelle (Rachel True), and Nancy Downs (Fairuza Balk).

The three goths really are witches who need a fourth person to complete their coven, and Sarah is a good choice because she is the only one with any actual magical powers as demonstrated by her pencil disappearing act ALA the Joker, only this time no one dies and the pencil just falls on her desk and she scoots it out of sight into her lap. Still pretty good. They take her to a Hot Topic (occult shop) and the woman there says what we already know, that Sarah is a natural born witch. Outside the shop a crazy old man (not claiming to be a scientist) with a snake harasses Sarah (he showed up earlier at Sarah’s new house) and all four girls wish him dead and then he gets hit by a car. This conspiracy to commit murder is a bonding experience and now they are friends, I guess.

Sarah goes on a date with Skeet but plays hard to get by not immediately sleeping with him on their first date which is the also the first day they had met. Now it is Skeet’s turn to play hard to get, and the next day brags about having sex with Sarah. Sarah, tired of this cat and mouse game she is playing with Skeet, goes to the woods with her coven friends and they all cast spells. Sarah’s spell is to have Skeet love her like a love song baby. She and two other girls are going small time on their wishful spell casting, Nancy is the only one with any vision as she desires to have all the power of Manon. This might be a gamble though, because there is a chance Manon is made up and has no power.

Shortly thereafter (the next day, weeks?) the spells show signs of working. Skeet is in love with Sarah, or maybe he decided he shouldn’t be so mean to an attractive girl. Bonnie, who was scarred in a fire and wished to be beautiful both inside and out, now undergoes a new experimental therapy and her skins heals. Was that magic or just good science? We may never know the truth. Rochelle was getting hate upon by a popular girl at school (join the club Rochelle!) and wished to love those who hate her (or something), but now her bully is going bald (but for all we know this girl recently started getting chemotherapy treatments). Also I think having bad things happen to the ones who bully you is not loving your enemies as Jesus taught it. Nancy, the one with all the power and a hunger for blood, basically kills her stepfather by blowing up a bunch of electronics in their trailer. Or there was a power surge and the shock of the incident caused him to have a heart attack. Basically what I’m saying is this is all circumstantial magic so far.

Nancy’s step father had recently and randomly gotten a $175,000 life insurance policy, and now Nancy and her mother are “rich.” They immediately move into a high-rise condo and start blowing all the money. They’ll be back in that trailer soon enough.

The girls go back to the Hot Topic and get a book about how to gain more power. They perform a rite on the beach, Nancy gets struck by lightning, and the next morning Nancy is walking on water. The book was about “Invoking the Spirit” so maybe this means Nancy is Jesus now. We don’t know. The thing we do know is that all those petty spells the girls cast earlier are starting to backfire. Rochelle has basically ruined the bully’s life, and her reflection disapproves. And Skeet tries to rape Sarah. Sarah goes to Nancy for help, and Nancy first tries to seduce Skeet (by masquerading as Sarah) and then throws him out a window to his death. I guess Nancy’s spell doesn’t backfire, it isn’t like her stepfather comes back to life or anything.

At this point Sarah finally wises up and realizes maybe dabbling in witchcraft is a mistake. She tries to stop her friends, but they turn on her and start using their powers against her. I’m guessing in the end they won’t win though, because they had no power before Sarah showed up, because she is the only natural born witch in this movie.

Sarah goes back to the Hot Topic, and is told how to win the fight, but isn’t motivated enough to do it yet. Luckily the three other girls will help her reach her full potential, as they invade her home and convince her that her family is dead and she must commit suicide. Nancy cuts her wrists and creates a suicide note. Sarah goes upstairs to die, and while up there is told by a Harry Potter portrait of her mother to go ahead and invoke the spirit of this obviously evil Manon guy. She does and is healed. Nancy is defeated and sent to a psych-ward. Bonnie and Rochelle lose their powers and try to see if Sarah still has them, which she demonstrates by nearly killing them with a falling tree branch and then threatening them. Another successful Catholic Boarding School graduate. Except it took nearly a minute for her to summon the clouds that created the lightning which struck the tree which felled the branch. The two girls could have just walked up and punched her in the throat and won the battle, so magic isn’t all that great.

And that is The Craft. Sony has been kicking around the idea of a reboot or a “20 years later” sequel. I didn’t like it when I originally saw it in 1996 and I didn’t like it now, but it apparently enjoys something of a cult following. Or is it a coven?