It is the same Hell’s Kitchen from Daredevil that we find ourselves in for much of Jessica Jones. We follow our titular character as she attempts to make a living for herself as a Private Eye, but Jessica is significantly more than she appears – gifted with super-strength and very limited flying abilities, she gave up her attempt at super-heroics after a prolonged encounter with a man who can control minds, Kilgrave, left her with severe PTSD. 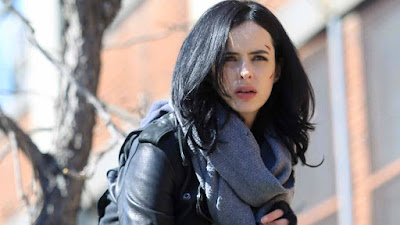 In case that basic synopsis isn’t enough of a clue, the topics that Jessica Jones deals with are sensitive ones. Although the idea of mind control has been used in various ways in the Marvel Cinematic Universe before now, it’s never been explored in such detail – the implication of somebody being able to control not just your actions but your very thoughts and emotions is naturally horrifying, and the loss of agency that comes with that haunts everyone that Kilgrave uses. And it isn’t just an allegory for rape or sexual abuse – Jessica herself is a rape survivor thanks to Kilgrave, and much of the shows focus on human sexuality (and the diverse nature of it) shows us her taking that aspect of herself back from Kilgrave. One of my only concerns going into Jessica Jones was that this aspect of the show would be handled poorly, in an exploitative way or used for shock value, but I’m pleased to say that it isn’t.

If some of that sounds a little heavy for a superhero show then you’ll be pleased to find out that Jessica Jones isn’t just a superhero show, at least not in the way that you might expect. Don’t get me wrong, it’s very ‘comic book’ at times, with multiple characters having superpowers and the show having subtle (and not so subtle) links to the larger Marvel Cinematic Universe – but in much that same way that Daredevil was a crime show first and a superhero show second, Jessica Jones is very film noir for much of its run time, with Jessica the cynical and jaded narrator talking us through her thoughts. She’s a fascinating character to base a show around, in some ways the prototypical noir protagonist – deeply damaged and self-destructive (particularly in her coping mechanisms) but also truly heroic when given the chance, she isn’t so much an anti-hero as she is a hero who has been through too much, and thanks to an emotional and often understated performance from Krysten Ritter I can’t imagine anyone else in the role.

The entire supporting cast is on the whole pretty great, particularly Mike Colter as bulletproof bar owner Luke Cage and Carrie-Anne Moss as cut-throat lawyer Jeri Hogarth, but special mention has to be made to David Tennant as Kilgrave. The way he is written and how that ties into the subtext of Jessica Jones already meant that Kilgrave was destined to be the best villain in a Marvel Studios production to date, but Tennant’s performance takes that and elevates the entire thing to a new level, making Kilgrave one of the best villains of any comic book property that I’ve ever seen. Kilgrave is broken at a fundamental level, petty and cruel and completely lacking any concept of right and wrong thanks to how long he has been abusing his powers, and the result of that is that he has no regard for anyone beyond what they can do for him. His motivations are simple and make sense in a twisted way once you understand the character, which just makes his particular brand of villainy all the more disturbing – because people like Kilgrave (sans powers, obviously) exist in the real world.

He is effectively the living embodiment of entitlement, a disgusting human being without a moral compass who decides what to do based on what he wants right now and nothing more – but he’s also charming when he wants to be, a true manipulator who hides just how nasty he actually is behind a carefully crafted façade of niceness and a level of self-pity that is both understandable and almost certainly unearned, and Tennant balances these two sides of the character perfectly. More impressively, Jessica Jones isn’t afraid to humanise Kilgrave without ever justifying him – his back story is a sympathetic one, but we see other characters with much the same story who have taken a very different path, and the show doesn’t try to explain away his actions by making you feel sorry for him. 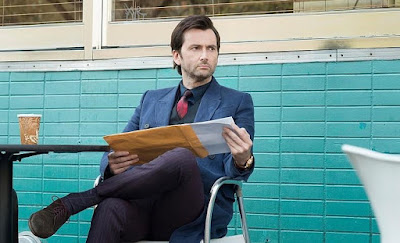 The fact that everything about Kilgrave ends up tying into the subtext and themes of Jessica Jones is a testament to how well written the show actually is, never mind the consistently high quality of each episode . Whereas Daredevil peaked very early on and very slowly went downhill from there (I should mention here that Daredevil was still never anything less than good even in its worst moments), Jessica Jones starts off good and continuously gets better until it peaks around about episode nine with what I can only describe as some of the best few episodes of any show I’ve ever seen. It does drop in quality slightly over the last few episodes with the introduction of sub-plots that the show doesn’t need and an increased focus on the most tertiary of side characters taking some of the momentum out of the build up to the final confrontation, but even here it is amongst some of the best television of the year.

Jessica Jones isn’t perfect, but the minor flaws it contains are more than made up for by the multitude of strengths that come with them. In a time when television is regularly giving us shows that raise the bar for what the small screen can offer, Jessica Jones still manages to stand out as a show worth paying attention to, a legitimately great season that would work just as well on its own as it  does as a part of the Marvel Cinematic Universe. Jessica Jones is stronger and more confident in its first season than the vast majority of shows ever manage to be, and I can’t wait to see what the Netflix/Marvel Studios partnership brings us next.