Update -> Unfortunately, while KutuluMike was able to get the lung transplant that he needs, he passed away about 1.5 years later due during the Covid-19 pandemic (although not due to Covid-19). He was remembered by friends on the Scifi.StackExchange.com Meta post KutuluMike (Michael Edenfield) has passed away.

Our very own KutuluMike needs to have both of his lungs replaced due to a severe lung disease. No one expects you to donate your lungs for this (in all likelyhood, you are currently using yours), and for whatever reason, he is only willing to accept human lungs (picky much?). However, he does have a Go Fund Me account where he is hoping to get money which will help sustain him after he gets a transplant. The money would go towards insurance, medical, and pharmaceutical costs. If you are able to contribute please do.

When I was a kid, I regularly read Whizzer & Chips and Buster and occasionally read of the Disney comics, but I never got into the DC/Marvel worlds – probably because they were too expensive and I was quite happy with books.  Over the years I occasionally flicked through a comic, and I was vaguely aware of the major storylines, but never a regular comic reader.  Over the last month, I’ve tried out the comic world.

This question was posted on Feb 1st, 2011 inquiring about what the is the best order to watch all six of the the [tag]Star-Wars[/tag] saga movies.

After receiving my own copy of the newly released Blu-ray version of the epic tale, I brought it upon myself to actually do what the most popular, and accepted answer to this question was as a test to see if the answer to the question has merit, or just looked good on paper.

56 of the users of SciFi.SE voted the answer “Watch the movie in this order: Episode IV -> Episode V -> Episode I -> Episode II -> Episode III -> and finally Episode VI.” I even upvoted this question. But alas, I haven’t actually watched this series in order (any relative order, in fact) ever. The last time I watched a Star Wars movie was when Episode III came to theatres in 2005. And before that I watched Episode II and I. I never actually watched all 3 of the original trilogy in order either. I only ever watched it when it was on the TV in passing. I did see the re-release in theatres in 1997 but before that, I don’t think I ever actually saw the whole trilogy.

I always considered myself a fan of the series, but when I look back on what I have actually exposed myself to, my main viewing of Star Wars has been mostly the New Trilogy.

This got me thinking about more than just how I voted on that one question, but how I vote on a lot of questions. I fully support ever answer I upvote, but in all honesty, most of the answers that I have given the “big up arrow” to were ones I just believed were right.

But I wanted to change that. I wanted to actually use the information given to me on this wonderful site and put it to practical use.

So, lets get started…

Some time ago, in the first chaotic weeks of http://scifi.stackexchange.com, I had a question that I considered asking, but I never did, due to my realization that it wasn’t a great fit for Stack Exchange. I’m now going to post my personal answer to that question here, as this seems like a more appropriate area for discussion. If you don’t want to read my life history, or just get bored, please at least read the last paragraph!

Ever since I was young, I remember reading about space and books about space, and being absolutely fascinated. At the time, I wanted to be an astronaut, to go into space, and make a difference. I read books, many of which I can’t even remember the names of now, and watched TV shows like Star Trek, and thought, “man, would that be awesome or what!”

I realized that in order to even be considered to do such things, I needed to learn more. I started reading sites like Space.com, and added dramatically to my sci-fi reading. I started to realize I needed to excel, which encouraged me to learn as much as I could, especially about science, math, and eventually engineering.

Unfortunate to my astronaut dreams, I learned that I would have to be in tremendous shape. While I’ve always intellectually stretched myself, I’ve never been good at physically stretching myself. So, I decided, what would be the next best thing? To build something that would go into space, of course! 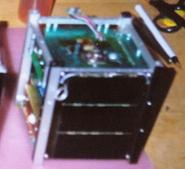 A Cubesat is a 10 cm cube shaped satellite, weighing 1 kg. Yes, that’s extremely tiny, but how big of a satellite do you think that students could launch anyways? I joined the effort quite late, and ended up on the Ground Station team. I was hooked. I learned from my time at this project how to complete a project, how to define requirements, and many other skills that would help me later. We built 2 satellites, named Rincon and SACRED, which we attempted to launch. I’ve included a small picture of one of them, SACRED. The satellite would have solar cells on all 6 faces eventually, but it lets you kind of see what they look like.

On July 26, 2006, I would learn new lessons from this program. Both of these satellites were in a Russian Rocket, the DNEPR, preparing to launch. Well, the launch ended up being a disaster, as is currently discussed in Wikipedia. So, I learned that day how to handle disappointment, and how to do so in a room full of press.

Luckily, my path continued forward. In March of that year, I was in a similar high stress environment. A spacecraft was about to enter Mars Orbit, known as the Mars Reconnaissance Orbiter. Some of you out there might ask, why did I care? Well, a few weeks previously, largely owing to my space excitement from sci-fi reading, and my work with Cubesats, I was offered a job working as a student programmer on this mission, but contingent on just one thing: the program wouldn’t have money to pay us if the spacecraft didn’t orbit Mars. I waited with bated breath in the same room that I would wait 4 months later to see if our satellites would orbit, but this time, waiting to find out if a spacecraft I never touched would orbit a distant world, with a job contingent on the success of the mission, which I had nothing to do with. Luckily for me, and all of us space enthusiasts, the Mars Orbital Insertion was successful, and I could start my job. During my time there, I was able to learn programming constructs that I could carry to a full time job.

The knowledge I gained from both of these student jobs would help me to get my current job, where I am a simulation developer for a defense contractor, helping to defend our nation. I have no doubt that it will continue to help me achieve great things. I still have some time to decide, but I owe much of it to my love of science fiction, which encouraged me to follow a dream.

So, what does all of this have to do with you? I don’t know what your personal stories are. Maybe your love of science fiction has changed you, or maybe it’s only something you wonder. I encourage all of you to do something to help achieve the world of science fiction, so that it can be a reality. Many current technologies we have were first predicted by science fiction authors, who might have inspired the very people who created the real products later. Many mission controllers at NASA, or big executives of space decisions, or even common electronics like cell phones, have all come about as a result of science fiction. So, please encourage children to read science fiction, or watch it. Our world will be a better place because of it.