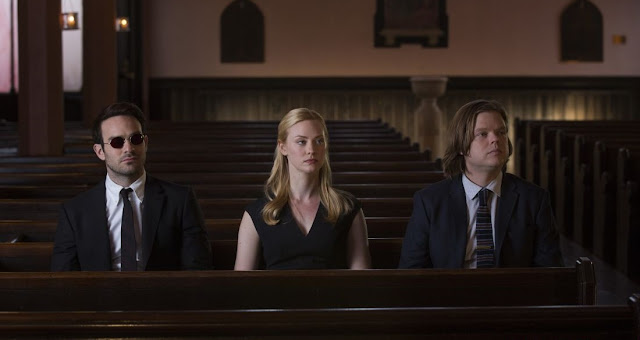 Most people (myself included) thoroughly enjoyed the first season of Daredevil. It wasn’t perfect by any means, hampered by an increasingly meandering story as it went on and a finale that dropped the ball in a multitude of ways, but as an introduction to this new part of the ever-expanding Marvel Cinematic Universe? It did a good job of setting the tone for the rest of the Netflix shows, something followed up by and capitalised on by the significantly better Jessica Jones.

There are two fairly distinct stories at play in the second season of Daredevil. The first sees the introduction of fan-favourite character Frank Castle (also known as The Punisher) to the Marvel Cinematic Universe, a murderous vigilante who is terrorising Hell’s Kitchen as he seeks revenge for the death of his family at the hands of criminals. The other sees Matt reunite with Elektra Natchios, an old girlfriend from Matt’s time in college who is significantly more dangerous than she may appear at first glance.

They’re both good storylines in their own ways, used to show us different parts of who Matt is and how he sees the world – but it’s obvious that the Frank Castle side of things is the more interesting of the two. Whereas Elektra is just another side character for Matt to interact with (and not a particularly well-developed one at that, despite the best efforts of actress Elodie Yung), Frank acts as an entirely separate viewpoint into the season, more like a secondary protagonist than anything else.

And it works incredibly well – Frank actually ends up being the most interesting character that the show has produced so far thanks to some excellent writing that really dives into the psychology of the character, a handful of truly brutal action scenes and a phenomenal performance from Jon Bernthal. This is the definitive version of The Punisher, and I’d watch a show centered around him in a heartbeat – but I have to admit that I’d rather see him co-star in future seasons of Daredevil, simply because his uneasy relationship with Daredevil and the ideological differences between them help make Matt less boring.

Because I think we need to admit that Matt was a little boring in the first season. It was fairly interesting seeing him trying to consolidate his vigilantism with his conscience, day job and faith, but it also made him a little too brooding for my taste. And although that’s still somewhat true here, the Matt we meet in the second season is simple more confident in himself, and over the course of the season we grow to realise one very important thing about him – he absolutely loves beating people up, a character flaw that bites him in the ass towards the latter half of the season but also makes him significantly more fun to be around. Take the incredibly impressive stairwell fight sequence towards the end of the third episode for example – a little laugh to himself just before the fighting starts tells us everything we need to know about who Matt Murdoch really is.

Also more interesting this season are both Karen and Foggy, who spent most of last season trying to solve a mystery that both we the audience and Matt himself already knew the answer to. Daredevil makes no such mistake this time around – other than one instance where Karen finds out some information just minutes before it is all revealed anyway, they both have their own stories independent of Matt’s adventures, the resulting being that they both really develop as characters over the course of the season. For Foggy, that means learning that he has value outside of his relationship to Matt (which is pretty meta considering some of the reactions that people had to him in the first season), and although Karen’s is a little harder to define without entering the realm of incredibly vague spoilers, I will say that I enjoyed the way that it used one of the more controversial aspects of the first season to its advantage.

The only real flaws that Daredevil‘s second season suffer from are those relating to the way that various storylines conclude. The overall ending to the big mystery of the season doesn’t really make much sense, and the season finale hinges around being invested in a huge fight sequence against an organisation whose unclear goals mean that they never really seem all that threatening – but even then Daredevil kind of makes it work, the execution of each conclusion being good enough to get away with the fact that it doesn’t quite feel right and could have done with a rewrite or two. And that says it all really – by the time the season finale came around, I was so invested in what was going on that I was willing to deal with a substandard conclusion simply because of how good that which came before had been.

There just isn’t an area where the second season of Daredevil doesn’t improve on the first, and if the almost inevitable third season can continue that trajectory we could be looking at something really special. The action is better, the stories more engaging, the characters more interesting – hell, we even get more time with Nelson and Murdock actually being lawyers, another example of the show seemingly listening to criticism and trying to act on it. So I’ll say just this in my attempt to influence the third season of the show – can we please get a proper visualisation of Matt’s radar sense?

Oh, and fix the costume already.

This article was originally published on ScreenNerds.