Comparison of physical copy vs a digital copy

Back in 1975 a movie came out that terrified people to not want to ever go into the ocean again. That movie was Jaws.

Similarly, there have been other movies that tried to be the “Jaws of [insert mundane activity here]” to no avail. But Contagion, at least for me, was quite successful in making me paranoid of every day life.

Contagion, written by Scott Z. Burns and directed by Steven Soderbergh, follows a young woman returning from Hong Kong to a very serious flu/disease. The beginning of the film shows how this disease was contracted by about 5-6 different people. Eventually, the virus starts killing people within days of being contracted.

News breaks out soon that people are dying and the remainder of the film follows a Man and his daughter, the WHO as they follow the contagion, a CDC agent, and a freelance reporter.

There’s also a great deal of information on how the CDC and WHO actually create vaccines and the protocols for containing a virus of that magnitude. I learned a lot about bio-chemistry from this movie without even knowing it (Like what an R-0 of a virus is, or how a virus mutates, or that the average human touches their face 2500 times a day).

A social aspect of the movie that I found quite interesting was how it showed how some people followed rules and suggestions to the T, while others (mostly those who were in charge of said rules) created their own personal protocols for selfish reasons. See how sane people rationalize or go into a mob mentality when the urge to survive kicks in.

Another interesting theme I found was how it explored the idea of using a social network to bend the minds of the masses into either avoiding or taking a specific treatment. That is to say, how the use of Facebook or a blog can actually influence a certain population to do something that may or may not be the right thing to do, and how this control could be coming from a very unlikely place.

After the movie, I was literally scared to touch anything. I was scared to even use the bathroom in the theatre. This movie did exactly what it was intending to do, and that was to make me paranoid. I know this winter season, I’m now going to be carrying extra Purel and probably investing into a medical mask. All-in-all I would highly recommend this movie for those who like thrillers where there is no mystery, only the instinct to survive at the character’s grasp.

Review: Roger Zelazny, A Night in the Lonesome October 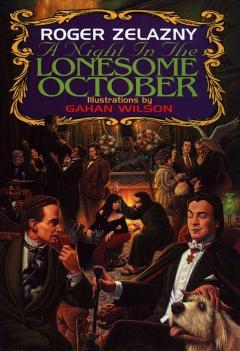 I am a watchdog. My name is Snuff. I live with my master Jack outside of London now. I like Soho very much at night with its smelly fogs and dark streets. It is silent then and we go for long walks.

The story is told in a prologue and thirty-one chapters, one for each day in October. It is sometimes said that it should be read one chapter at a time throughout October. I had read it several times, but always in one go, so I decided to give one chapter per day a try, albeit a month and a half early. Frankly, I can’t say that the book gained from the experience. But if you haven’t read it, you might give it a try. Read in one sitting or 32, it’s a good book either way.

Beyond the fine story, what I like about Zelazny is his mastery of style: so simple, so fluid, and yet so compelling. He does not use big words or big sentences. And even for him, the style in this story is appropriate for a dog, yet not dumbed down. The story simply flows from the page.

The novel tells the story of a strange Game, a metaphysical conflict between those who want to open the way for the Old Ones, and those who would thwart them. Every few decades, when moon is full on the night of Halloween, players spend the month of October preparing for the night when the fate of the world is to be decided. Each player has an animal companion.

This time, the Game is played in the suburbs of London. The players are a motley crew. Besides Jack, who prowls the streets of London at night with a knife and his faithful dog Snuff, there is Jill and her cat Graymalk. Other players are the Count, a seclusive being, and his equally nocturnal familiar Needle (a bat); Owen and the squirrel Cheeter; the Mad Monk Rastov and the black snake Quicklime; Morris and McCab, whose familiar is the owl Nightwind. Then we meet the vicar, by all appearances a respectable clergyman — but those who know of his secret activities would differ, and he has a companion, the raven Tekela. Other colourful characters include the Good Doctor, who seems to not only have an animal companion, the rat Bubo, but also a human one, a very large man sometimes seen lumbering about his house; Larry Talbot, who could be his own companion; and the Great Detective, a master of disguise.

As the story progresses, the players learn about each other, form alliances, turn traitor. Friendships are formed, too, not always following the alignment of the characters as players. The last night may yet reveal some secrets.

Jack and Jill went down the hill. Gray and I ran after.

The Fall TV season has begun, and so starts a torrential stream of new shows and new episodes of returning shows. Here’s a quick rundown of many of the returning and new Sci-fi and Fantasy shows.  Dates are for the USA – feel free to leave a comment with dates in your country.  Note that if you haven’t seen the latest seasons of currently running scif-fi/fantasy shows (e.g. if they are delayed in your country), then there may be spoilers ahead.

A story broke last week that spread across the internet, shocking everyone that read it. As STL Today reported, Mike Meyer, who has been on Social Security for a mental disability for over half of his life, was robbed of his nearly all of his enormous collection of Superman memorabilia. Six decades worth of comic books and items ranging from old-time radio and a television bearing Superman’s likeness, were all stolen by a former co-worker of Mike’s. After this news broke, it traveled faster than a locomotive to comic book news sites, among them Comic Book Resources and Comics Alliance, where the outreach to help Meyer replace his stolen collection has been truly heroic.

After Stack Exchange’s CHAOS team was made aware of the “replace-the-collection” campaign, we decided to act. Thor Parker, Midtown Comics’ Marketing and Events Coordinator, directed me to this post on the Midtown Comics blog which contains an address where replacement Superman items can be sent. Midtown themselves have been champions of this cause, donating some choice Superman items to Mike (including a copy of Justice League #1 signed by Geoff Johns and Jim Lee at a recent Midtown Comics event). Inspired by their act of generosity, the Stack Exchange CHAOS team took a field trip to Midtown Comics.

I’m an account-holder at Midtown Comics, so I know that they’re kinda the place to go for comics in New York City. We went to the big store near Times Square, which has a mighty selection of statues, graphic novels, statues and action figures to choose from. The graphic novel and trade paperback collection is massive. We settled on an over-sized edition of Brian Azzarello and Jim Lee’s Superman story “For Tomorrow.”

The store always has exciting sales going on, and this unofficial company trip was in the middle of a 40% off back issues sale. To the back issue bins! We picked out a healthy stack of Action Comics and Superman back issues as well as current Superman adventures published monthly by DC Comics. CHAOS agents Katey and Aarthi picked out some cool items (wall decorations, hats and magnets!), but we all had our eye on one thing…statues.

I’ve never bought a statue at Midtown comics, but the Superman vs. Bizarro Ultimate Showdown statue was crazy tempting. We had to get it. The Midtown employees were more than happy to track the statue down and even took it out of the box to let me inspect it. They were incredibly friendly and knowledgeable and have probably convinced me that I need to buy a lot more statues for myself.

After finalizing our Superman swag, we checked out, returned to the Stack HQ and shipped the items off to Mike. Stack Exchange was very excited to be able to help out a person in need, and is very thankful to Midtown Comics for making us aware of this initiative, having a great selection of items, and generally being a great store.

UPDATE: Comic Book Resources reported over the weekend that Mike’s collection has been recovered and the criminal caught. A truly happy ending to this tale!